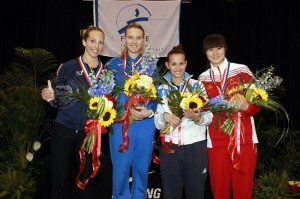 Olga Kharlan (UKR) defeated Mariel Zagunis (USA) 15-10 to take the victory at the Korfanty Cup, held in Chicago, IL.  Zagunis and Kharlan fenced touch for touch with Kharlan taking an 8-7 lead at the break.  After the break Kharlan edged the score her way and despite a rally from Zagunis, was able to close the bout out 15-10.

In the Men’s Sabre event, the final was anticlimatic as Szilagyi was facing an obviously hurt Kim in the gold medal bout.  With Kim unable to move, Szilagyi scored on attacks and went to an 8-4 lead at the break.  During the first period, Kim was able to score a few points on point in line and a riposte, but he was not in the bout.  At the break, Kim was unable to proceed and withdrew from the tournament.

Full results are available at http://www.usfencingresults.com/