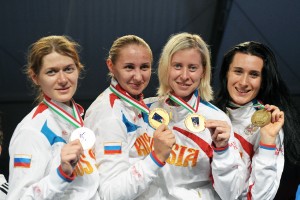 Russia is looking to upgrade their Euro Gold to Olympic Gold

We’re taking a look around all the potential brackets for the team events for the London 2012 Olympics. Michael took a look through the matches this season to come up with some ideas on how the Women’s Epee Team event might play out in London.

Russia has a 10-1 record against the 2012 Olympic field this season (including their European championships wins). Their first round match is against Ukraine. They defeated Ukraine 45-33 in their first match this season, which was not surprising considering Ukraine’s 2-7 record against the field for the season (prior to Euros).

Romania makes their way to the finals by moving through a match with Korea in the first round and then facing off against the winner of Italy and the USA.

The USA is 1-0 against the higher ranked Italian team, and could score an upset win here. The USA is unlikely to make their way past Romania. The two teams have not fenced this season, but Romania has remained very strong.

If that goes down, then Romania faces 2nd ranked China (another first time match this season) to go to the gold medal match against Russia.

Maybe some magic happens, but the safe bet is China over Italy/USA for the bronze.

30 points separate the #1 seed from the #3 seed and at the bottom half of the bracket, less than 8 points separate the 7/8 slot.  Depending on how Leipzig shakes out, the points could switch a good bit.  As one epee fencer pointed out to us – Ukraine will be replacing a 3rd place finish from last year’s event AND Germany will be fencing to better a 14th place from last season.  We’ll have to revisit the tables after this weekend, but for now here are the picks.

Current FIE Rankings which will base the bracket seeding. Record against the field was prior to the zonal championships: