Fencing in Games: Magic the Gathering 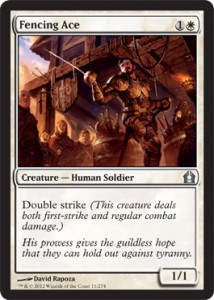 Fencing Ace from Magic: The Gathering

Fencing makes an appearance in the popular trading card game Magic: The Gathering as one of the cards in the new set is titled “Fencing Ace”.

As a strategic card game, Magic has it’s similarities with the thought processes of fencing – you build a deck of cards to run against other decks that may be using a range of strategies to win the game.  During the games you set up situations where you hope to trap the opponent into working into your game plan instead of utilizing their own.

What other games out there have a fencing feel or feature fencers somewhere in the game play?