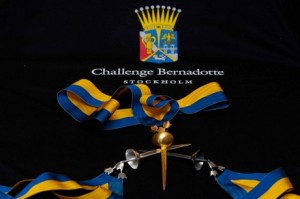 The Challenge Bernadotte has been cancelled for 2013.

The Challenge Bernadotte has been a fixture in the Men’s Epee Grand Prix circuit.  Now it is another casualty of the increasing costs of running fencing tournaments as the event has been cancelled.  The 2013 Grand Prix was projected to operate at a loss of 175,000 Swedish Krona (about $26,500 USD).

We learned of the tournament’s cancellation via Soren Thompson’s Facebook status where he calls the event one of his favorites.

The FIE also tweeted it here:

Is this going to be the case for more premier events?

Here is the announcement issued from: http://www.fencing.se/nyheter/ingen-challenge-bernadotte-2013/

It is with great sadness that a united board yesterday forced to make the decision not to arrange Challenge Bernadotte 2013th We had to decide no later than six months prior to the competition. Otherwise we would face heavy fines if we later dropped out, says union chairman Lars Liljegren.

Herrvärjtävlingen Challenge Bernadotte started in 1977 and was recognized by the World Cup 1998th 2003 was the individual race a Grand Prix Race, while the team competition continued to be a WC race. Since 2011, the contest only one individual competition.

The competition has year after year been renewed Grand Prix status, with only two additional individual men’s competitions in the world (Qatar and Switzerland).

– Costs have risen sharply in recent years, including because of new competition rules of the International Fencing Federation. Fencing is not strong enough and widespread in Sweden that a sponsor would be interested to fund the competition. We therefore can not afford to Challenge Bernadotte with the conditions that apply, says Lars Liljegren.

– Swedish fencing can be extremely proud of the race. It is regarded as one of the best organized in the world. And it has happened with volunteers, which include adolescents and fäktföräldrar has made great efforts. But unfortunately we can not cope with the financial burden when our resources right now should be primarily devoted to improving our own fencing.

– In particular I want to thank Oscar Bernadotte, former chairman of Djurgården IF Fencing, and founder of the race, and Pierre Thullberg and Ana Valero-Collantes, who has been the competition’s brilliant project through the years.

– There is now a sometimes confusing debate, where such representatives of the Swedish sports and government participation. It’s primarily about how we can get these new international arrangements. Swedish fencing could have hit both the European and World Championships, if we tried. The problem for the vast majority of sports federations, besides the few commercially very strong, is to make ends meet in both the races we already arranged and in those we could have if we were looking for. The state has over the years received millions in tax revenue by Challenge Bernadotte, concludes Lars Liljegren.