Italy: We Will Win 7 Medals in Rio (Fencing) 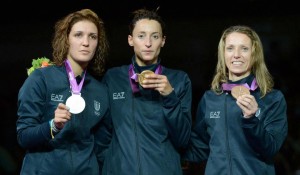 Italy is banking on another strong showing by their core fencers to win 7 medals in the 2016 Olympics.

The Italian Fencing Federation has already laid down their target for the 2016 Olympics in Rio de Janeiro.

“Our goal for Rio de Janeiro 2016 is to repeat the results we obtained in London. So we will win seven medals, which will be a nice average, looking at what happens in general ” said Giorgio Scarso, the President of the Italian Fencing Federation during a celebration for the Italian medal winners from 2012.

Italy topped the medal table in London with 7 medals, matching their 7 medal performance in the 2008 Beijing Olympics.

Scarso continued saying that Italy could have won 10 or even 11 medals in 2012 and that Italy should have their core set of athletes returning for 2016.

The one caution Scarso points to is the lack of a Women’s Team Foil medal, since that event looks to rotate out for the 2016 Games.  “We are working on having the rule revised in the light of the great success of our sport in the media. Fencing is the most popular sport (in Italy) after athletics and swimming, a significant step forward. If the rule is not changed we will cope with it accordingly,” president Scarso said.

The goal of 7 medals should not come as a surprise.  While other nations have fluctuated wildly in their Olympic performances, Italy has been very consistent but has earned the bulk of their medals in Women’s Foil – sweeping the individual events and earning Gold in the team event in London.  Contrast that consistency with the US and Korea over the past 2 cycles.  The USA went from 6 medals in Beijing to 1 medal in London and Korea went from 1 medal in Beijing to 6 in London.