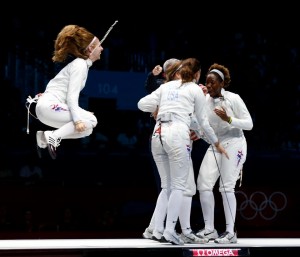 After 9 full bouts the bronze medal match was locked in a 30-30 deadlock at the end of regulation.  Priority for the overtime period went to Courtney Hurley, closer for the US team.  Hurley and Anna Sivkova (RUS) jockeyed for position on the strip, then in a flurry of action both fencers missed their marks, but Hurley would land the remise and deliver the first Olympic medal for US Fencing.

Courtney was surrounded by her teammates as they were first shocked at what had just happened, and then celebrated with gusto at the accomplishment.

The US Team flying high on their bronze medal win. Photo: SergeTimacheff/FencingPhotos.com

Early in the match the two teams played to a tie but then Shutova won 4-1 against Kelley Hurley, who was substituted in for just this match.  Susie Scanlan said that it was important because of the rules surrounding the team events that Kelley fence, and “there are two of the Russians who I am streaky against…in team consistency is important.”

In her next bout, Kelley Hurley was warmed up and ready.  Down 15-11, she went on a 4-1 run against the Russian closer, Sivkova and brought the US within one touch and would hand the match off to her sister, Courtney.

The Russians would come back again to tie the match at 23-23 before Maya Lawrence put the US up 2, 27-25, before handing the match over to Courtney Hurley to close it out.

In the final bout of the match, Hurley faced off against Anna Sivkova and the Russian rallied back and put Russia ahead.  Hurley kept her head and fought back, forcing a 30-30 tie at the end of regulation, and then the overtime win.