Tim Morehouse gets his own Fencing Shoe 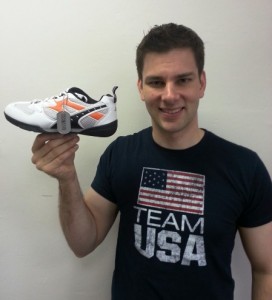 Tim Morehouse now has a shoe named after him. (Photo via timmorehouse.wordpress.com)

Absolute Fencing is releasing their new model of fencing shoe, which they are dubbing the Morehouse USA Elite in honor of Tim Morehouse.  As far as we can tell, this is the first fencing shoe named after a fencer.  When Nike released the Nike Air Ballestra fencing shoes in 2008, they did have a color scheme created specifically for Italian fencer Margherita Granbassi.

While this is the first fencing shoe to bear the name of an athlete, other fencing products have featured athlete names.  Leon Paul has released a series of blades bearing design input from the athletes who have their names stamped on them: The Zagunis Pro (sabre), Kolobkov Pro (epee), and Golubitsky Pro (foil).

Tim Morehouse has pointed to the naming of a fencing shoe after him as being one more step in bringing fencing into the best marketing practices of other sports.  His hope is that more manufacturers will find benefits in working with elite athletes to further their brands and allow the athletes to develop personal brands of their own.

NEW YORK — Olympic silver medalist Tim Morehouse has become the first U.S. fencing athlete to have a shoe named after him. The “Morehouse USA Elite” shoe, produced by Absolute Fencing, a leading fencing equipment company, will go on sale this week.  Morehouse will personally autograph the first 100 pairs of shoes available for the first time at the St. Louis North American Cup Oct. 12-15.

The shoes, which will retail at $75 are available for pre-order. A special promotional rate of $69.99 will be available until the end of October. A portion of the proceeds from the shoe sales will benefit Fencing in the Schools, Morehouse’s foundation whose mission is to bring the sport of fencing to schools around the country to fight obesity and spread Olympic ideals.

“I think this is a great move on Absolute Fencing’s part,” said Morehouse, who won an Olympic silver medal in Beijing and is the only remaining active U.S. male Olympic medalist fencer on Team USA. “They’re supporting an athlete and also helping to market their shoes to the community.  This is a win-win.”

Morehouse says his mission to grow the sport involves making it more accessible and affordable.  “What I love about these shoes is that they are not just the best pair I’ve ever worn, but also priced in way that is affordable for everyone,” he says.

Founded by Gary Lu, a former national team member and four-time All-American fencer at Penn State, Absolute Fencing is a family-owned business that has been supporting USA Fencing, and is the official equipment provider to major fencing events worldwide including the 2011 World University Games and 2010 Asian Games. Absolute also sponsors the US Fencing academic scholarships program to top academic fencers.

“Tim has been one of our country’s greatest Olympians, but the reason we love him is that he has been one of our best ambassadors and role models,” Lu said. “We’re honored to be working with him, and we want to help him promote fencing and reach more kids and people across the country.”

In addition to Morehouse’s trips to the Olympic Games, he is a two-time U.S. National Champion (2010, 2011) and recently was honored as a “Champion For Change” at the White House for his service to the country with the Teach For America Program. Morehouse recently authored American Fencer: Modern Lessons from an Ancient Sport (www.americanfencer.com), a book that chronicles his journey from the streets of Washington Heights to the Olympic podium and he is currently on a promotional tour around the country to spread fencing and fight childhood obesity.(www.timmorehouse.com).