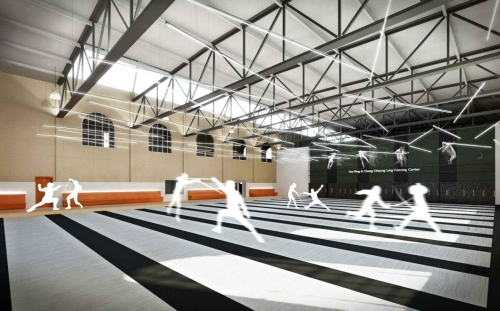 This is what the new practice room for the UPenn fencing team could look like once the gym reopens in the fall of 2013.

Penn’s Hutchinson Gymnasium is the current home to a number of sports teams, including UPenn’s NCAA Fencing Team.  This gym is nearly 100 years old and will be receiving a number of upgrades.

The big one for the fencing team: air conditioning.

“In fencing, you always have to wear the mask and jacket all the time for protection, so there is always sweat, more than other sports,” fencing coach Andy Ma said. “The air conditioning will be huge.”

The fencing team will also reap the benefits of a new practice facility, meaning they won’t have to train in two small rooms in the Hutch basement.

For the near term, the fencing team will train at the Levy Indoor Tennis Courts along with the gymnastics team.

Both teams, however, will gain a great deal from the renovation of Hutch, which was built in the 1920s.

The renovation is scheduled to complete in time for reopening in the fall of 2013.

Read more at the Daily Pennsylvanian.