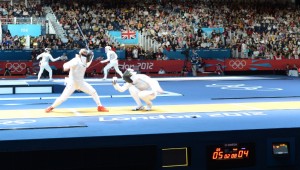 Mona Shaito (LIB) survived a comeback by Shaimaa Elgammal and won 7-6 in overtime to advance to the round of 32 where she will face Elisa DiFrancisca (ITA).

Shaito and Elgammal started the bout slowly, resulting in non-combativity being called and advancing directly to the 2nd period with a 0-0 score.

Elgammal earned the first touch, but Shaito continued to add pressure, scoring on several attacks to put her ahead 5-1 to start the 3rd period.

Shaito’s lead would soon evaporate as Elgammal figured out the length of Mona’s attacks and landed a few counter-attacks as Shaito fell short.

At 5-3 a riposte call for Shaito was reversed to make the score 5-4 instead of 6-3.  That led to two more hits against Shaito as Elgammal was ready for the attack. 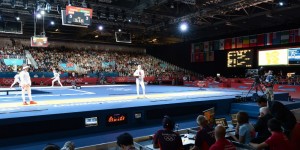 Fencers await the ruling on the replay.

Down 6-5 Mona pushed the attack again, but had the distance and timing correct to hit the low-line attack.

Tied at the end of regulation, 6-6, priority was awarded to Shaito for the one minute overtime.  Knowing that she needed to put on pressure to win, Elgammal pushed Shaito back to her side of the piste. 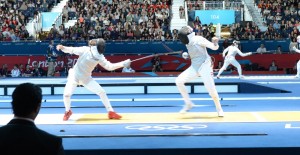 Shaito was ready as Elgammal stepped in with a large preparation, and landed her attack with 17 seconds left in the overtime period.

Mona Shaito represents Lebanon in these Games but is from Garland, TX and was a 1st team All American for Ohio State in the 2011-2012 season.