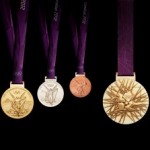 The Olympic fencing events at the 2012 Olympics, in both team and individual, are run in an elimination bracket.  The fencers and teams are ranked according to their FIE world rankings (with some additional changes) and put into a direct elimination table.

Here are the updated rules from the FIE on how the individual and team events will be run.  (This format was also used for the 2008 Olympics)

Individual events are fenced as direct elimination bouts of 15 touches.  In the medal rounds, the 3rd place bout for the bronze medal will be fenced.

Fencing matches are set as 3 periods of 3 minutes each, with a 1 minute break in between each period.  Is sabre (because it moves so fast), the break occurs when one fencer reaches 8 touches.  If the score is tied at the end of the last period, then a 1 minute sudden-death overtime period is fenced.

For the individual events, the initial seeding into the elimination table follows this procedure:

Short version: Any fencers who are tied in rankings or who don’t have a ranking will be sorted out by random lots.  Then the entire table draws lots which could switch up #1 #2, etc so that we won’t have the final individual tournament table for a preview until the afternoon of July 26th.  (The drawing of lots is by pairs, so #1 and #2 draw lots, then #3 #4, all the way down to the last pair.)

Team events are fenced as a relay system where the 3 person teams fence in smaller bouts against each member of the other team.  In the team events, the first team to 45 touches, or the team in the lead when time expires is the winner.

In the relay system, the fencers fence until the score reaches the multiple of 5 for their match.  (The first bout goes until either 3 minutes expires or one fencer reaches 5 points, the second bout until one team reaches 10 points, etc.)

If team are tied at the end of the regulation time in the final (9th) bout, then there is a 1 minute sudden-death overtime period fenced between the two fencers who fenced in the 9th bout.

How they are ranked:

The classification of the teams will be made according to the Adjusted FIE Team Official Ranking at each weapon. In case there are teams tied in rankings, a drawing by lots will be carried out.

The team of the organizing country, which has been allocated 8 places, will be placed in the direct elimination table according to its place in the current Adjusted FIE Team Official Ranking at the weapon concerned.

The team events will be run by direct elimination throughout and the places 5 to 8 will be fenced.