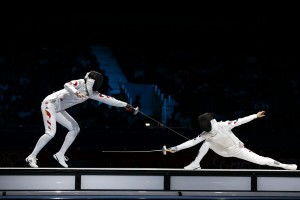 Russia’s Yana Zvereva came out of nowhere to win the Sparkassen-Weltcup Women’s Epee World Cup in Leipzig, Germany. The Russian, ranked 106th at the end of last season, started out the top-64 knocking off 11th seed Maya Lawrence (USA) 12-6 and kept on winning.

The US fielded 8 competitors with varied results. Olympic medalists Maya Lawrence and Courtney Hurley both maintained world rankings to bye into their direct elimination rounds, while their teammates Lindsay Campbell and Kelly Hurley put up 5-1 and 3-3 results respectively in the preliminary pools. Also in pools, Natalie Vie scored 5 victories in pools as well to be seeded near the top of fencers who competed in the pool round. Francesca Bassa and Isis Washington both made the cut with 2 victories, while Eleanor Leighton did not advance.

While Campbell and Vie’s performances were good enough to score them byes in the 128, only Washington joined top ranked fencers Lawrence and Courtney Hurley in the round of 64. Lawrence took a tough loss to 53rd ranked Yana Zvereva of Russia who went on to take the gold medal, while Washington’s loss came to Sun Yujie of China who took home the bronze.

Courtney Hurley went on win 3 consecutive elimination bouts to make the top 8 at the event, where she lost 11-15 to Irina Embrich of Estonia.

China made the best showing of the weekend, placing 3 athletes in the final 8 of the individual event and winning the team event with a 25-22 victory over Hungary in the team finals.

In the team event, team USA was seeded third to bye into the top 16 where they lost to Hungary 44-36. In the placement rounds, they defeated Hong Kong, but lost close matches to Estonia and Germany.