Diego Occhiuzzi Gives Back with Gym in Naples 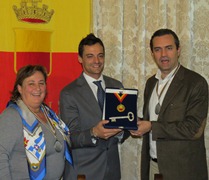 Diego Occhiuzzi won a multi-sport gym for his home town of Naples. (FederScherma.it)

2012 London Silver Medalist Diego Occhiuzzi (ITA) is giving back to his local community in Naples. Occhiuzzi received a key to the city of Naples from the Mayor, Luigi De Magistris and the city alderman in charge of sport, Pina Tommasielli.

The information comes from user gladius, who posted the story to this thread in the forums.

During the ceremony, the mayor kept the promise he made at the London Olympics by “giving” to Diego Occhiuzzi a “palextra” (a multi sport gym) of 9,000 sq ft which will be remodeled with three fencing strips, a boxing ring, a tatami for martial arts, and an exercise room for all athletes.

This is the realization of a project proposed by Associazione Milleculture (a partnership between Carpisa, Porzio Sport management, and Foundation Cannavaro-Ferrara) of which Occhiuzzi is president and major spokesman.

“We selected this day because we are exactly six months after Occhiuzzi’s podium (finish) at the Olympics,” said Mayor De Magistris. “This is the proof that united we win. I was very touched by what Diego said in London. He spoke of the kids in Naples and his desire to be the first do something [for them]. Now the best part of the challenge will be to fill these structures with young kids…”

It will take about ten months to remodel and retrofit the sporting area. “We will have dressing rooms, an infirmary, and an office. We made plans also for a dancing area and a physiotherapy rehabilitation center, this is why we call it Palextra (a combination between palestra = gym and extra),” Diego explains. “I’m happy that we can realize a community project for the kids in our city. We want to take the youths away from the street first, then we’ll have the chance to form future champions. Our plan is medium-long term. We are looking at 2020.”

The primary goals of this project are,increase in sport activities for young kids,

The official presentation of the association whose president is Diego Occhiuzzi will be in mid February during a ceremony which will include other elite athletes from the Campania region who decided to participate in and lend their support to Occhiuzzi’s initiative.

This is a translation of the original article via FederScherma.