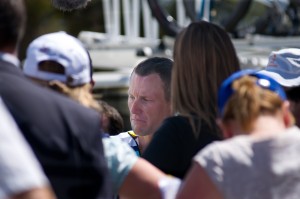 Lance Armstrong is coming clean about his drug use. (photo via BigStock)

Lance Armstrong is coming out this week to finally come clean about his use of performance enhancing drugs (PEDs) during his cycling career.  He has already been stripped of his seven Tour de France titles because of the doping charges and delivered an apology to the staff at the Livestrong foundation.

This month also saw a total of zero inductees into the Baseball Hall of Fame – a protest by sports writers due to PEDs in the sport.  Juicing has tarnished the legacies of MLB athletes including Barry Bonds, Mark McGuire, and Sammy Sosa.

Thinking about the impact of PEDs on sports in general, and specifically on youth sports, plus answering a lot of questions from my boys who are paying attention to what these athletes do, got me to thinking about the fencers who provide inspiration.

This is by no means a comprehensive list of inspirational athletes. I left out some personal stories – maybe they deserve to be their own series one day when I can do them justice. These athletes are ones that brought me into or back to fencing, each in their own way. 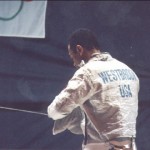 Westbrook was my first view of the real sport of fencing.  When I started I just knew he was that guy who earned the bronze medal in the 1984 Olympics.  As I started taking lessons and learned more about the sport I got to watch more of what Peter did both on and off the strip.  The Peter Westbook Foundation quickly grew to be US Fencing’s “feel good” story and the devotion Westbrook shows just makes you want to do more. 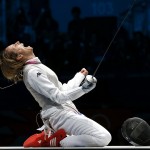 Vezzali has been so good for so long.  The moment that took her abilities from just “wow, she’s good” to actual awe inspiring was her ability to take time off from the sport due to pregnancy then in a short time train back up to her peak to win the individual world championship in that same year!  Granted, Vezzali had the benefits of being firmly embedded in Italy’s “professional” fencing system but the feat is remarkable nonetheless. 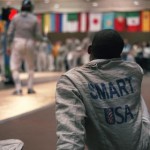 Keeth Smart looks on during a World Cup

Smart was one of the fencers I kept watch on when first writing articles for Fencing.Net. He had established himself as our great sabre fencer and had to endure the disappointment of the defeat in 2004.  His story has been covered many times over, even in a feature documentary.  Watching Keeth rally back and win for the US team and then get a second chance to close out the semi-final bout against Pozdniakov was stunning – just thinking about it now makes me grin. His run through the 2008 Games was one of redemption and a fitting way to close out his fencing career.

Those are just a few of the fencers that have provided inspiration and I kept it to some of the big names.  I put the question out to Facebook in this post, and people are responding with both “famous” names as well as some lesser known but highly personal sources of inspiration.

We all have our heroes – big and small – and one of the things sports let us do is share those heroes and their stories with our families and friends. I’ll put that question back out to you – what athletes inspire you and how will you share those stories?