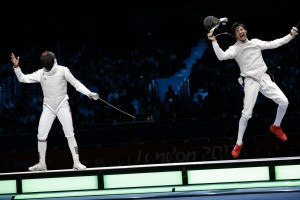 History was made as Abouelkassem (EGY) became the first fencer from an African nation to win an Olympic medal.

@alaaeldinelsay1 is the first ever african medalist in fencing!!! 😀

The 21 year old Abouelkassem did not look like an Olympic rookie today, posting wins over the likes of Peter Joppich and Andrea Cassara just to make it to the top-4.

In the Gold medal bout he faced Lei Sheng (CHN) and was down early 2-4 when he received an injury time-out for an arm cramp.

After the time-out, Lei Sheng pressed his advantage and was up 8-6 at the end of the first period.  During the second period, Abouelkassem landed 3 straight counter-attacks to go ahead 11-10.  Sheng tied the match with an attack before Abouelkassem push ahead again 13-11.  Sheng was not done, and rattled off 4 unanswered touches to win the match 15-13.

And Lei from China wins it!! 15-13 #Fencing. Abouelkassem of #Egypt has a lot to be proud of, big day for his country

In the semi-finals Lei Sheng pushed out to an early 6-4 lead against Andrea Baldini (ITA).  Baldini would keep pushing Sheng but was unable to cut into the lead.  Baldini started pressing more with more aggressive attacks, but Sheng was ready for them and won 15-11.

Baldini was frustrated by the result, but congratulated his opponent: “It’s a real pity because I knew what I had to do, but I committed a couple of stupid mistakes and he just fenced flawlessly.”

Abouelkassem advanced to the gold medal bout with a victory over Choi.  The bout started slowly and Choi would receive 3 red card penalties, the difference in the 15-12 match.  After two periods, the score was 5-4, but then Choi received a red card penalty to go down 7-5.  On the following touch Choi ran at Abouelkassem, was hit by the riposte, and then his momentum carried him into the television camera.

The rest of the bout would not go much better for Choi, who went down 14-13 on a red card for falling.

Dead Lame at the Olympics?

During the first period of the bronze medal bout, Baldini, down 4-3, launched an attack that clearly hit the center of Choi’s chest but the off-target light fired.  On testing, Choi’s lame was found to be dead and he had to change to another one.

After the bout resumed, Choi scored the next touch on a counter-attack and pushed the lead to 9-5 to go into the 2nd period.  During the 2nd period, Baldini would go on a 9-5 run to tied the score 14-14.  Early in the 3rd period Choi launched an attack that scored, winning him the bronze.