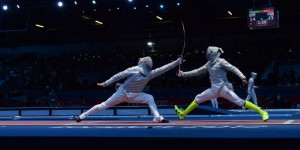 The men’s sabre medal rounds have an Eastern European flavor but no dominant country as fencers from Russia, Hungary, Italy, and Romania advance to compete for the gold medal.

US fencers put the world on notice as Tim Morehouse and Daryl Homer advanced to the top-8.  Homer would finish 6th and Morehouse 8th.

Upsets abounded with only 1 of the top 4 seeds making the round of 8.  5th seeded Szilagyi (HUN) is the top seed remaining in the semi-finals.

The semi-finals of the 2008 Olympic Men’s Sabre event will pit Kovalev (RUS) vs. Szilagyi (HUN) and Occhiuzz

How they got there:

Nikolay Kovalev (RUS) claimed his spot in the final four by defeating US fencer James Williams 15-12, then Woo Young Won (KOR) 15-11.  In the quarter-finals Kovalev faced top seed Nicolas Limbach (GER) and was able to win 15-12.

Aron Szilagyi (HUN) entered the day as the 5th seed in the tournament.  He dominated his first match with a 15-1 thrashing of Peng Kean Yu (MAS).  He then defeated 2008 Gold Medalist Zhong Man (CHN) 15-10.  For the quarter-finals he faced upset-minded Max Hartung (GER), the tournament’s 20th seed 15-13.

The story of the preliminary rounds was the performance by American fencers Tim Morehouse and Daryl Homer.  Homer, the 18th seed, showed what he can do on the piste by holding off a last run from #2 seed Alexsey Yakimenko to win on a one-light riposte 15-14 and advance to the 8.

Morehouse entered the tournament as the 27th seed, but you would not know that by his 15-6 dismantling of Russian Veniamin Reshetnikov, the 6th seed, in the round of 32.  Morehouse was so dominant that the bout concluded with a 7-1 run.  In the 16 Morehouse defeated Dmitri Lapkes (BLR) 15-13.

Their quarterfinal matches would pit Homer against Rares Dumitrescu (ROU) and Morehouse against Diego Occhiuzzi (ITA).

During their matches, the US crowd was making so much noise that the fencers were unable to hear the referee’s command to fence several times.  Gamesmanship also abounded in both bouts as Dumitrescu and Occhiuzzi called on the referees to penalize their American foes for either false starts, or delaying the bout when they failed to hear the command to fence.

The US men will fence again in the team event on Friday, August 3rd where they will take on Russia in the opening round.  Today’s fencing served to put Russia on notice not to take the US team lightly as the US won 2 out of the 3 match ups today.

The referees were quick to penalize false starts in the sabre event today, which influenced several bouts.  In the round of 32, Luigi Tarantino (ITA) lost a bout when at 14-14 he was called for a false start against Max Hartung (GER).  Both fencers suffered penalties during the bout as that was Tarantino’s second offense and Hartung had also received two penalties (a yellow and then red card) for the infraction.