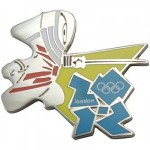 Fencers and fans are getting ready for the 2012 Olympics. (Pin from TeamFanShop)

Your abbreviated roundup of fencing news from around the web.

First, on the fencers:

Race Imboden on Fencing at the Olympics

(I want to know which Atlanta club turned him away):

“…when I was eight, and they said I was too young, so when I was 9 I, like, marked it down on my calendar whenever I could go and made them take me back, ’cause I loved the idea of it so much. I was like, This is a great thing where I can play with swords for sport. This is exactly what I want. [Laughs.]“

Success has earned her enough corporate sponsors to allow near complete devotion to fencing while still putting food on the table and keeping a roof over her head. Food is her other passion, and likely the subject of her twitter tweets as much as her fencing exploits.

Courtney Hurley has sister supporting her in Olympic fencing

Courtney Hurley started fencing at age 8. You might say she was born to it: She is the daughter of fencers, her father is her coach, and her sister Kelley is a fellow Olympian.

…in the spring of 2011, Scanlan decided to take a few years off from school. That was, after all, the only way the St. Paul Central graduate could get in her five- to six-hour daily workouts — a regimen that helped earn her a trip to London.

Besides, Princeton will be there after the Olympics.

Olympics Factbox: Fencing at the Olympics

The sport of fencing is one of just four to be contested at every Olympic Games of the modern era, starting in 1896. In London 212 competitors will vie for 10 gold medals, six individual and four team.

Here are some facts and trivia about fencing.

The mammoth ExCeL Center, an abbreviated name for its full title of Exhibition Centre London, has five different arenas for athletes to compete simultaneously across the facility.

Fencing is a combination of physical, mental skills

Fencers need leg and core strength and physical stamina, but Bergen Fencing Club coach Oleg Stetsiv says elite bouts, like those at the Olympic level, are won with confidence and mental sharpness because all of the athletes are well-trained and in top condition.