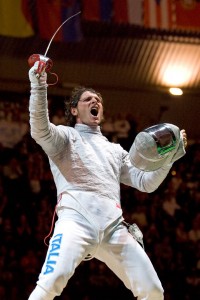 Aldo Montano (ITA) won the 2011 World Championship in Men’s Sabre coming off of an injury. It looks like he’ll have to try to will his way to another Olympic medal, if he recovers in time to compete at the London Olympics. The FIS web site is reporting that Montano was injured in his final match against Diego Occhiuzzi (ITA) and had to withdraw, giving Occhiuzzi the Italian title.

Posted in the forums by member gladius:

In the final of the Italian Senior National championships last Saturday in Bologna, Aldo Montano suffered an injury and had to abandon. See the video on FedrschermaTV of the final Montano-Occhiuzzi. This was particularly disheartening for Aldo who has never won a senior Italian championship title. It was sad also for Occhiuzzi, the 2012 senior Italian champion, since this is not how he wanted to win.

Antonio Fiore, MD, FIS chief medical officer, after the tests today describes a case of muscular lesion to the large adductor muscle in the left thigh. He said, “From the MRI done today at the Villa Stuart clinic in Rome, it appears to be a muscular lesion but because of a large hematoma in the affected area we cannot exactly evaluate the true nature and extent of the injury. This is why it is essential that Aldo be in total rest these days to allow for the fading of the hematoma. In about 10 days we’ll redo the specific tests and working together with the specialists at the clinic we’ll determine the recovery time.”

For Fiore it is impossible at this stage to say if Aldo Montano will or will not be able to compete in London.

“We’ll have to evaluate,” continued Dr. Fiore, “not only the time for the biological healing but also the rehabilitation of his technical level and general physical conditioning.”

Aldo Montano after his rage and worries immediately after the incident is showing his determination, character, and desire to be a protagonist in London. “I never give up,” assures Aldo. “Come back up again and win is one of my motto. One more time I’ll have to find the strength to rise again and this I have. Now I’ll have to go through this period of forced rest hoping that it will help in the recovery and most importantly that it will allow me to be on the strip in london where, whatever my condition, I’ll give it all I’ve got.”